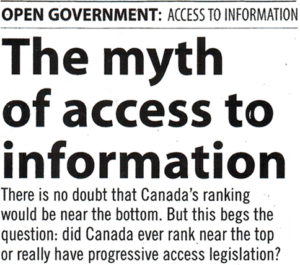 Canada needs to drastically improve its freedom of information (FOI) / right to information (RTI) legislation. Its existing legislation is too much a secrecy act and not working well, contrary to the myths officials put forward. It may be necessary tactically to go after selective changes to overcome such restrictions but the object is to move towards, not away from, achieving greater transparency.  The current government under Justin Trudeau has passed a regressive access to information bill, lacks adequate accountability and is shrinking and stifling transparency.

There are new threats to suspend FOI legislation. There are immense challenges to prevent top-down secrecy in Canada. That includes covering, in a meaningful way, ministerial offices and  ending policy advice and cabinet secrecy roadblocks from dominating public discourse and access to information.

A broader transparency bill needs to feature a pro active disclosure code and agreements and draw from other countries. Back in 2009, I had presented to a parliamentary committee a model FOI/RTI bill (français) that mostly addressed gaining better access to government information.

A decade later, reiterated here are some key features that a FOI/RTI bill needs. Canadians need an advocacy group that fully takes on this job. Here’s a twelve-point “things to do” reform package for advocates.

Canada can learn from other countries adopting FOI/RTI legislation and from under way international efforts at achieving greater transparency.

For FOI / RTI reform to occur, there needs to be both the will to do so and commitment and a natural desire to know, to be curious. We cannot have a right to know without citizenry who value their rights to freedom of expression and have a critical desire to inform and be informed.

My career has been built around testing the public’s right to know and getting that right dramatically improved. I challenge all of us to take up the cause of a more transparent society. I’m still there to be an information warrior along with you.


“He doggedly pushed for information rights, never letting up on those who could make changes to policy or to legislation that improve the access of citizens to the information they needed as well as paid for. And Ken has never let up. Ken’s expertise also made him an indispensable investigator for those seeking to gain full disclosure that Canadians have a right to as citizens. Canadians owe him more than they can imagine.”

“Mr. Rubin reflects an attitude of professionalism and compassion in his approach to reporting. He exemplifies a ruthless approach to research, a broad interest in Canadian policies, and an insistence on an open and ethical treatment of information in Canada.”

“No excuse for stifling information” Ken Rubin, Citizen, Dec 21/20 A5;

Liberals after Year One: Not much transparency despite talk – Ottawa Citizen, Oct 18/16

Justin Trudeau: A sunny positive tone but is it a transparent one?, Ken Rubin, Hill Times, November 2, 2015 p.16

FOI / RTI Realities Hinder But Do Not Stop Consideration of Reforms

WHAT PEOPLE DO NOT KNOW CAN OFTEN HURT THEM